The Opel Olympia was a civilian car used by the German military during World War 2. It first entered production as a two-door car in 1935. In 1937, a more powerful engine was installed, and a four-door variant was introduced.

Production stopped in 1940, as the Opel plant was converted to war production. After the war, in 1947, Opel resumed production of the Olympia. 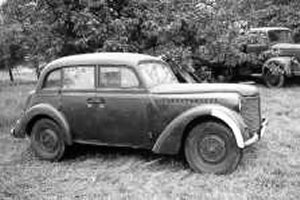 Side view of an Opel Olympia.

Rear view. The marking show that the vehicle is from 10. Panzer-Division.